Day to day, Andy Whittle, Product Engineering Manager, helps to make sure our shoes are made just as our customers love them and that they will fit perfectly. When he’s not perfecting our shoes, he’s treading the boards of a theatre playing some of his favourite characters. He recently played cold hearted Ebenezer Scrooge! We interviewed Andy, exclusively for ‘It’s A Shoe Thing’, to find out more… 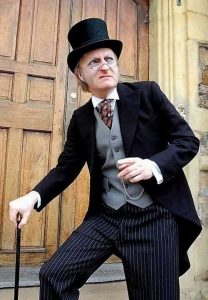 How long have you been acting?

Who do you act with?

I joined Kendal Amateur Operatic society in 1979 after moving from Manchester. I’m a member of several societies in the Lancaster area, my current main society is Red Rose Amateur Operatic Society and my first show was The Merry Widow.

What made you start?

Having moved from my home town of Middleton in Manchester to the Lake District by my parents at the age of seventeen I was basically in need of a hobby!

What roles have you played?

Notably the King in The King and I, Fagin in Oliver, Pontius Pilot in Jesus Christ Superstar and many other roles – Scrooge has probably been one of my favourite roles.

What was your favourite and why?

Fagin, I always loved the Ron Moody portrayal in the 1960’s movie, you get a great rapport with the kids in Fagin’s gang, its great fun.

I played my dream role when I was cast as Fagin last year!

Have you ever worn Hotter shoes on stage? Or wished you had?

I wore a pair of Gladstone as Scrooge!

How long did it take to learn the part of Scrooge?

This is actually the second time I have played Scrooge however the musical had been updated and many song lyrics had been amended for Tommy Steele so it was a case of “re-learning” the part, rehearsals spanned a three month period but in reality one night a week for principle characters. A rest, the Red Rose society will be performing “Peter Pan” next year so perhaps Captain Hook!

Is there anyone else in your family who acts and have you acted together?

My mother, late father and one of my brothers. My wife who directed Scrooge this time, my son, who played the young Ebenezer, and daughter, mother-in-law and father-in-law.

What’s your top tip for someone who wants to take up acting?

Let go, have fun, remember that the show must go on! It’s a great hobby and many professionals have started on the amateur stage.

If you’ve got a hidden talent, and it involves Hotter in some way, we’d love to find out more. Please get in contact with us a weloveshoes@hotter.com.

It’s A Shoe Thing is the Hotter blog, from the UK’s biggest shoemaker. Discover our full collection of feel good style footwear at hotter.com or visit one of more than 70 stores across the UK.

Get in touch at weloveshoes@hotter.com

Julie, one of our Inspirational Women, is the founder of Move It Or Lose It, they are are on a mission to help you…